Hey guys! Sorry about the unannounced hiatus… again. I’ve been gone for ages! I slipped into a simultaneous reading and blogging slump, and then read a book which ALSO simultaneously got me out of and into a slump. It was an ARC of a book by an AMAZING author who I actually met on Twitter. 🙂 I’ll definitely try to get in a review of that pretty soon here! Anyhoo, let’s get on with it, shall we? 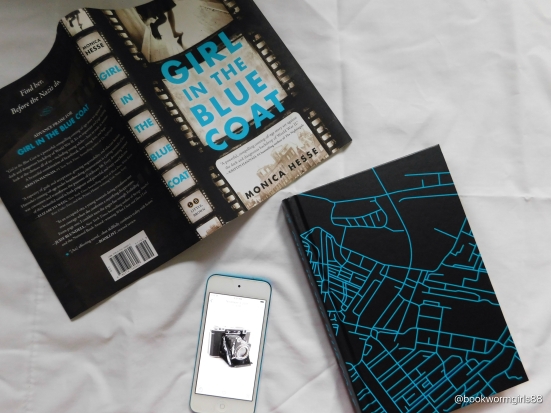 Wow. Girl in the Blue Coat has completely wrecked me emotionally. Whew. Where to start?

First off, I just want to take a minute to mention the historical accuracy of this book! In the back, the author has a few pages detailing where she got her information, and it’s clear she went to great lengths to make it as accurate as possible. All of the characters are fictional, but they feel as real as ever.

Usually, I’m not big on historical fiction. I tend to tell people that it’s “dusty”. I have nothing against the genre, but I’m guessing that it’s extremely difficult to write! The past is in the past, and it’s very difficult to make it seem lively and get readers to be invested in it. That’s probably the reason why history class can easily be boring. But in the right hands, it can be just as real as the sky is blue. Monica Hesse is definitely one of those people! The writing is just like a teenager is talking, not a documentary.

As for the plot, it’s absolutely beautifully crafted! The majority of the time, we simply hear about stories from Jewish people in the Holocaust (especially Anne). Obviously, this is very interesting and enlightening, but we don’t often see stories from your average German’s view, let alone a teenager. Hanneke is blond-haired, blue-eyed, and tall- on the outside, Hitler’s version of a perfect girl. And yet, she is broken and grieving, and merely trying to get through life, one painful day at a time. Her boyfriend died fighting against the Nazis, and she thinks it’s her fault. Her best friend married a Nazi, and they lost a 12-year friendship because of it. She is taking care of her parents, and if working through the black market ensures they don’t go hungry, so be it.

Life is going well, albeit monotone and somewhat horrifying. Until one day, when Hanneke is going about her usual rounds, delivering black market food, and one of her customers invites her in for coffee. Hanneke knows she shouldn’t, but she hasn’t had coffee in a very long time, and the smell draws her in. This is where the story truly begins, because Mrs. Janssen does not merely ask for some makeup, or extra meat. She asks for a person.

I was actually able to go into this book relatively blind. I have about 100 books on my physical TBR at home, and I received this book for… Christmas (I believe?) from my parents (I had asked for it). I knew it was historical fiction, I knew there was a girl in a blue coat, and I knew it would be GOOD. And boy, was I right!

You start out on the outside, cruising along at your own pace, before slowly getting sucked in, faster and faster and faster, becoming more and more invested until you reach the middle and you’re stuck, completely unable to escape the web. That’s what it feels like happens to Hanneke as the events of the book play out, and what happens to your level of investment and intrigue as you’re reading.

Like I said, I went into this book fairly blind, but expecting a good story, and Girl in the Blue Coat definitely did not disappoint. If you’re thinking that I’ve barely told you anything about the book, good! Now GO READ IT. NOW. This book sucks you in with its intrigue and relatability, and not only that, it’s important. The story, fictional as it may be, is important as well as heartbreaking (as everything related to the Holocaust must be). So alas, if you haven’t read this book, I highly recommend it! Definitely give it a shot. If you have, CRY WITH ME IN THE COMMENTS. I need it. 😭 Even if not, I missed you guys! Say hi in the comments anyway! 😉

Overall: 5/5 stars! I would definitely recommend this one!

12 thoughts on “Girl in the Blue Coat: Not so dusty after all?”